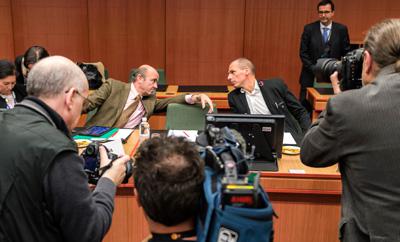 Euro-area finance ministers reached an accord that would keep bailout funds flowing to Greece in return for a commitment to meet certain conditions, buying time to work out the detail of longer-term Greek financing.

Talks in Brussels between officials from the 19 euro-area finance officials concluded Friday evening with an agreement to extend aid to Greece for four months.

?We agreed on four months under conditions,? Austrian Finance Minister Hans Joerg Schelling told reporters after the meeting. Greece must submit a list on Monday of measures it will undertake in return and ?the institutions check whether the list is sufficient,? he said.

Breakthrough in the standoff between Greece and its creditors eases the immediate risk of Prime Minister Alexis Tsipras?s government running out of cash as early as next month. It might also go some way to help repair the ties between Greece and Germany, the biggest European contributor to Greece?s 240 billion-euro ($274 billion) twin bailouts and the chief proponent of economic reforms in return.

U.S. stocks rose and the euro advanced with European equity futures amid optimism over the prospects for an accord.