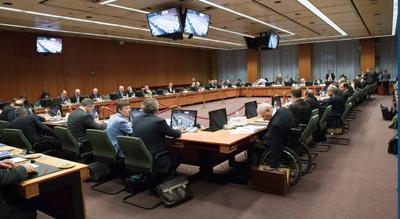 Greece and the Eurogroup agreed on Friday a deal to extend the country?s loan agreement for another four months, pending on lenders approving reform proposals due to be submitted by the Greek side on Monday.

The terms of the agreement reached after many hours of talks in Brussels Friday means that the country?s lenders ? the European Central Bank, the European Commission and the International Monetary Fund ? must approve the reforms proposed by Greece on Monday.

?The Greek authorities will present a first list of reform measures, based on the current arrangement, by the end of Monday, February 23,? the statement said. ?The institutions will provide a first view whether this is sufficiently comprehensive to be a valid starting point for a successful conclusion of the review. This list will be further specified and then agreed with the institutions by the end of April.?

Greece has yet to receive 7.2 billion euros in bailout installments that the previous government failed to secure. But the country?s creditors will only disburse these funds once the implementation of the measures has taken place by the end of April.

?Only approval of the conclusion of the review of the extended arrangement by the institutions in turn will allow for any disbursement of the outstanding tranche of the current EFSF program and the transfer of the 2014 SMP profits,? said the statement.

Greek Finance Minister Yanis Varoufakis stressed the importance of Greece being able to submit its own reforms and vowed to ?work night and day between now and Monday? to produce a ?fresh list of reforms.?

?The Greek authorities have expressed their strong commitment to a broader and deeper structural reform process aimed at durably improving growth and employment...