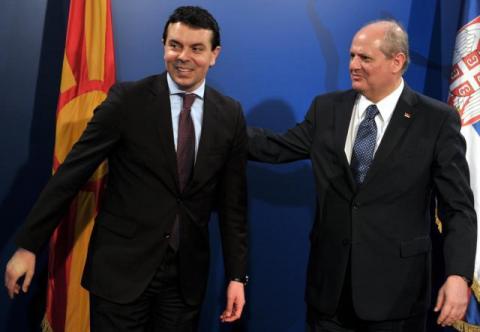 Poposki and Mrkić are seen in Belgrade (Tanjug)

BELGRADE -- Foreign Ministers of Serbia and Macedonia Ivan Mrkić and Nikola Poposki agreed on Friday in Belgrade that the two countries "share the same EU prospects."

They announced closer cooperation in the future.

"Our relations are exceptionally good and we are determined to strengthen them, and the best proof of this are the two governments' plans for future joint activities," Mrkić told a joint press conference.

Mrkić noted that Belgrade and Skopje organized the first joint sitting of the two governments last year, while a new meeting is planned to take place in the second half of 2014.

An agreement was made with the Macedonian side to prepare a joint consultation program, said Mrkić.

The topics discussed in the meeting included the situation in the region and the relations with the European Union, considering that both countries are vying for a full EU membership, said Mrkić.

Macedonian Foreign Minister Poposki stressed that Macedonia and Serbia have excellent relations and a shared vision in many areas.

Continued progress of countries in the region in the EU integration process is also in the interest of Macedonia, said Poposki.

Macedonia and Serbia share a common European future, which is why we are working on this goal together, he said.

"We plan to hold joint meetings and consultations this year with regard to the EU integration ", Poposki announced.

Macedonia's foreign minister pointed that the two countries have a strong bilateral trade, reaching USD 800 million at an annual level.

"We hope that it will be possible to enhance cooperation in the field of railway...