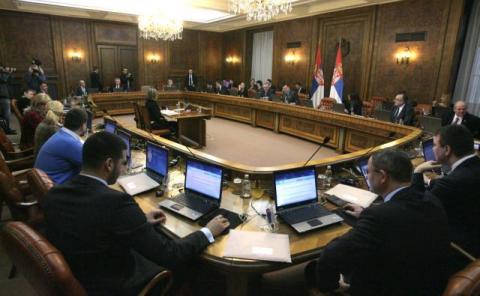 The government meeting on Thursday (Tanjug)

BELGRADE -- The Serbian government formed a working group on Thursday which will be tasked with coordinating the activities of Serbia's chairmanship of the OSCE.

Serbia will hold the Organization for Security and Cooperation in Europe (OSCE) chairmanship in 2015.

At its 18th session, the OSCE Ministerial Council appointed Serbia to chair the organization, as part of the joint nomination with Switzerland which is presiding this year.

The OSCE chairmanship is an opportunity for affirming Serbia's foreign policy priorities and promoting the country in Europe and the wider region, the Ministry of Foreign Affairs published on its website.

During Serbia's chairmanship in 2015, the OSCE will also mark 40 years since the adoption of the Helsinki Final Act, the organization's founding document that was signed on August 1, 1975 in the Finnish capital.

The document set out three clusters of obligations and fields of cooperation - military issues, economy, environmental protection and human rights - as well as 10 principles guiding relations between the OSCE member states.