Citizens should say whether or not they want reforms 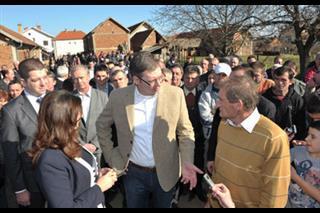 BELGRADE - Aleksandar Vucic, Serbian Progressive Party (SNS) leader and the country's first deputy prime minister, has said that it is very important that the March 16 elections show if the people want Serbia to go boldly forward with reforms or not, stressing that if the SNS wins the citizens' confidence, the party will insist on recovering Serbian economy and setting up a stable and legal state.

Asked who would make up the Serbian government in the event that SNS wins the elections, Vucic said that the only thing he is confident about is that Lazar Krstic will continue to hold the office of the finance minister.
"He is ready to risk his own popularity, but is not willing to risk Serbia's future," Vucic said, stressing that in choosing ministers, party affiliations will certainly not be a priority for the SNS.

When asked what the painful reforms facing the country he has been talking about are, Vucic said that Serbia has to adopt laws on planning and construction, labor, privatization, bankruptcy and state employees by the end of June.

He said he is already sure that not all will be satisfied by the new labor law.
"I will not lie to anyone. On Friday, I told miners in Lazarevac that there would not be a reversal of the solidarity tax for at least a year, until we lower the fiscal deficit," said Vucic.

Asked if it could happen that as many as 100,000 people lose their jobs, Vucic said he will do his best to prevent layoffs from taking place.

When it comes to relations with the Serbian president, Tomislav Nikolic, Vucic said: "He is doing a very good job and I expect the excellent cooperation between us to continue."

The SNS leader said that there is no conceptual conflict between pro-Russian...