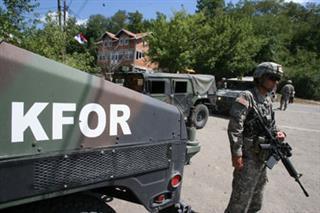 BELGRADE - Serbian Defense Minister Nebojsa Rodic said on Thursday that Serbia's citizens place the greatest trust in KFOR when compared to other international actors present in Kosovo-Metohija, and that by maintaining its status-neutral position, NATO will back the implementation of the Brussels agreement.

In talks with Commander of the Allied Joint Force Command Naples Admiral Bruce Clingan, Rodic said that it is of special importance that there is no reduction in the number of KFOR troops as that would hinder the implementation of the Military Technical Agreement, the Ministry of Defense has released.

Clingan voiced satisfaction about "the high-level communication between Serbia and NATO", as well as desire to further this good cooperation to the benefit of both sides, the release reads.

Rodic and Clingan also addressed regional cooperation and Serbia's role in creating a safe environment in the Balkans, as well as cooperation within the Partnership for Peace program.

A special emphasis has been placed on the importance of cooperation between the Serbian Armed Forces and KFOR, as its results have a significant effect on strengthening the security situation in the region.

During the meeting, the officials also talked about a meeting between deputy chiefs of general staff within the South-Eastern Europe Defense Ministerial (SEDM) process, which will be held in Belgrade on June 10-13, the release notes.