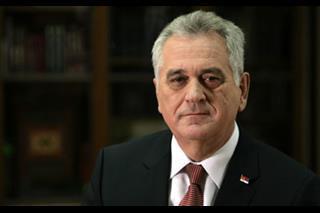 BELGRADE - Serbian President Tomislav Nikolic signed a decree on Monday, to mark the Statehood Day on February 15, whereby he decorated professor Itsuko Teruoka from Japan by a gold medal of merit for her exceptional engagement in humanitarian activities and delivered a posthumous decoration to Stella Jatras of the U.S. for exceptional merits in public and cultural activities and presentation of Serbia in the U.S.

Nikolic also posthumously decorated late president of the Anti-Corruption Council Verica Barac by a gold medal for exceptional merits in the fight against corruption and affirmation of the human rights and rule of law.

The president also delivered a posthumous recognition to late police officer Goran Djordjevic who was killed while on duty in Bujanovac and decorated him by a gold medal for exceptional merits in performance of duties and tasks in the security sector, the Presidency released.

The guardian of the Serb cemetery in Zeitenlik in Greece Djordje Mihajlovic was decorated by the Order of the Serbian Flag, the second degree, for special merits in preservation of cultural and historic heritage of Serbia and development and strengthening of cooperation and friendly ties between Serbia and Greece.