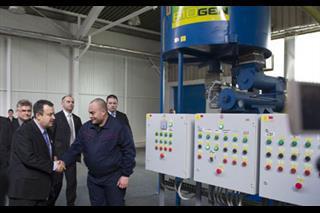 Dacic said it is particularly important that the plant is being opened in a mixed community, which people were leaving in the last several decades.

"The biggest problem of all of you here, regardless whether you are Serbs, ethnic Albanians or Roma, is the economic situation and unemployment. Children that are being born here should have a perspective, that they could live, work and survive in this area," Dacic said.

He said that the plant is also sending a signal to prospective investors to come to Medvedja.

Slovenian Ambassador to Serbia Franc But said that this is the donation of the Slovenian people and expected that some other Slovenian firm will come and invest in the area of Medvedja in the next year.

"In the last several years, Slovenia donated to Serbia EUR 4.3 million through various projects. Until now, there have been around 400 Slovenian firms in Serbia, which invested EUR 1.4 billion. I am sure that several investors will come this year, and that for some of them Medvedja will be an interesting investment destination," But said.

President of the municipality of Medvedja Slobodan Draskovic noted that this is the first production facility that has been opened in this town in the last 15 years.

The pellet plant "Jablanica EKO" will produce a ton of pellet for heating per hour, and the entire...