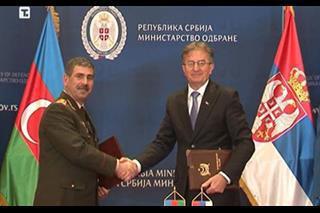 After signing the document in Belgrade on Monday, the two ministers expressed satisfaction about good relations between the two countries further improving.

Rodic pointed out that the agreement is creating a formal and legal framework to further improve military and economic, military and educational and military and medical cooperation between the two countries.

The Serbian minister said that the visit by the Azerbaijani official and signing of the document is a result of development of good and friendly relations between Serbia and Azerbaijan, “particularly after the signing of the Declaration on friendly relations and strategic partnership between the twp countries, signed by Presidents (of Serbia) Tomislav Nikolic and (Azerbaijan) Ilham Aliyev in Baku in February last year.”

Rodic said that military cooperation between the two countries is also improving through joint participation in military exercises, announcing the National Army of Azerbaijan taking part in a Viking 14 exercise and in an international Platinum Wolf 14 at the base South near Bujanovac before the end of the year.

Rodic thanked Hasanov for his country's "firm and principled support for Serbia's legitimate struggle to preserve the sovereignty and territorial integrity in the territory of Kosovo-Metohija (KiM).”

Zaharov said that military cooperation between the two countries is very important and that it will further improve thanks to the agreement signed.

Our military defense cooperation is good, but it will continue to develop, Said Zaharov, who leads a high-level...