SPS-PUPS-JS is for reforms and presidential election 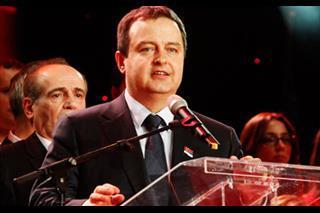 NOVI SAD - Socialist Party of Serbia (SPS) President Ivica Dacic said at an election rally of the SPS-PUPS-JS coalition on Sunday the coalition wanted reforms, but not those that would "eat people," that Vojvodina needed elections and that Serbia needed a presidential election.

Dacic told the crowd in Novi Sad everything had changed in Serbia, so Vojvodina needed provincial and local elections, while Serbia needed a presidential election in the future.

Everyone has known everyone else for 20 years now, so it is unlikely that someone will change their opinion during the election campaign, and it is known who did what during the sanctions and the bombing and all the things done in Serbia at that time, he said.

October 5 came after that, and the problem is not that that government fell, but that some have focused on the transition rather than the people, he noted.

The students also wanted changes on October 5, and they got high tuitions and lost the right to an education, their parents lost their jobs and the retired people got pensions reduced "almost to the level of a statistical error," he said.

The SPS-PUPS-JS coalition wants changes and reforms, but not those that will eat people, he stressed.

He called on the people to vote for the future of themselves and their children. The SPS-PUPS-JS coalition was tested each day while in power and it passed that test, he added.

The coalition has completed its programme goals and there has been no conflict within it, he pointed out.