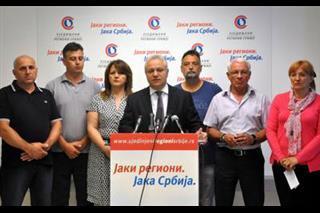 BELGRADE - The United Regions of Serbia submitted on Monday its slate, entitled Let's Work and Live for the snap parliamentary election on March 16.

The first name on the slate is that of URS leader Mladjan Dinkic, follwed yb Sasa Milenic and Verica Kalanovic.

URS Vice Preisdent Suzana Grubjesic is 6th on the list.

If the Electoral Commission accepts the slate, it will be printed as 7th on the ballot.

The coalition led by the Serbian Progressive Party will be the first option on the ballot, followed by the coalition between the Socialist Party of Serbia, Party of United Pensioners of Serbia and United Serbia.