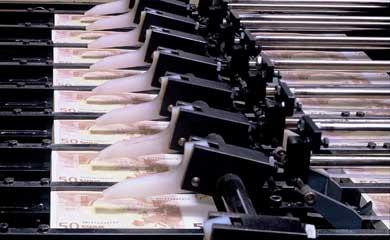 Economic growth across Europe is expected to be slightly stronger this year as the recovery gains ground, according to the European Commission's new forecast released Tuesday.

The 18-country eurozone's economy is expected to grow by 1.2 percent in 2014 and by 1.8 percent next year  0.1 percentage points more each year than predicted in the Commission's last forecast in November.

"The strengthening of domestic demand this year should help us to achieve more balanced and sustainable growth,» said Commissioner Olli Rehn, the bloc's top economic official. «The worst of the crisis may now be behind us."

Spain stands out as firmly turning the page on a two-year recession. The Commission doubled its 2014 growth outlook for the country to 1 percent. Its high unemployment rate, however, is expected to fall only slowly below 26 percent this year.

For the eurozone as a whole, the jobless rate is seen as staying flat around the current record high of 12 percent, falling to 11.7 percent only next year.

The wider 28-nation EU, which includes members like Britain and Poland that don't use the euro currency, will grow by 1.5 percent this year and 2.0 percent in 2015, according to the Commission forecast. That outlook is also revised upward by 0.1 percentage points each.

Rehn urged European governments to keep strengthening their economies' competitiveness and trim their deficits, saying the nascent recovery remains modest and can't be «an invitation to be complacent."

The only countries that are forecast to remain stuck in recession in 2014 are Cyprus and Slovenia, set to see their economies shrink by 4.8 percent and 0.1 percent respectively.

Cyprus last year required an international bailout that came with the...