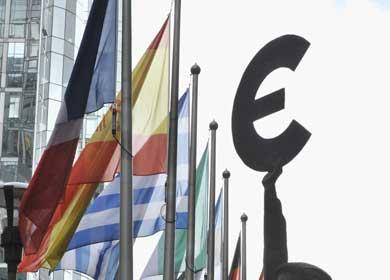 The euro-area economy will continue to lag behind its main competitors, the U.S. and China, this year and next as high levels of unemployment and debt hinder the currency blocs recovery.

Gross domestic product in the 18-nation eurozone will rise by 1.2 percent in 2014, an improvement from a 1.1 percent forecast in November, the Brussels-based European Commission said on Tuesday. While the unemployment rate will decrease to 12 percent this year, thats still the second-highest level in the euro era. And gross government debt will rise slightly to 95.9 percent of GDP.

As long as debt in several sectors of the economy remains too high, unemployment is at record levels and the adjustment of previous imbalances is incomplete, there is a serious risk of growth remaining stuck in low gear, Marco Buti, the head of the commissions economics department, said in a statement.

The latest outlook confirms that the scars from the ravages of the sovereign-debt crisis are healing slowly. While bond markets have stabilized and economic confidence is picking up, policy makers from Helsinki to Madrid are still grappling with slower growth and a higher unemployment rate than before the crisis started in 2008.

Tuesday's euro-area forecasts dont come close to matching the predicted expansion in the worlds other largest economies. The commission forecasts 2.9 percent growth in the U.S. this year and 7.4 percent in China.

The recent string of positive economic news has helped to balance the risks to the growth outlook since the autumn forecast, but on the whole downside risks continue to prevail, the commission said in Tuesdays report. The main risks to the forecast are stalling reforms, lower-than-expected inflation and...