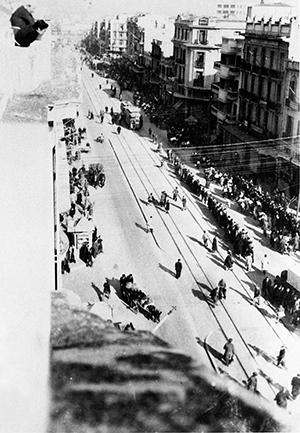 Greece's biggest Jewish community said Monday it has taken Germany to Europe's top human rights court, seeking the return of a huge ransom paid to Nazi occupiers more than 70 years ago to free thousands of slave laborers  who were still sent subsequently to German death camps.

The Jewish Community of Thessaloniki said it also wants «moral vindication» in a lawsuit tabled last week at the European Court of Human Rights in Strasbourg.

In 1942, thousands of Thessaloniki's Jewish men aged 18-45 were press-ganged into construction projects across Greece by Nazi forces that had invaded Greece a year earlier.

Current community leader David Saltiel told The Associated Press on Monday that about 10,000 men were used as slave laborers, building roads and fortifications or repairing railways, and brutal conditions led to 12.5 percent mortality in the first two-and-a-half months.

Community officials eventually struck a deal with a regional Nazi commander, paying him 1.9 billion drachmas  about 50 million euros ($69 million) today  for their release. But soon after, the city's entire Jewish population was sent to German death camps, which few survived.

"What happened is unbelievable,» Saltiel said. «Who could have imagined that (the Germans) would send men to work as forced laborers, that they would free them on payment of ransom and then lead them into the trains going to Auschwitz?"

About 96 percent of Thessaloniki's 50,000 Jews were murdered in Nazi camps.

The community launched a legal fight for return of the ransom through Greek courts in 1997. But after 16 years, in December, the country's Supreme Court rejected the bid, saying it lacked the authority to rule on the matter.