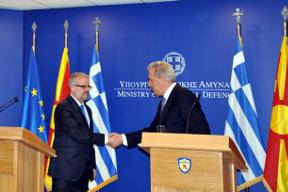 Macedonia and Greece defence ministers Talat Xhaferi and Dimitris Avramopoulos at the signing of the bilateral plan for co-operation in Athens.[Macedonia Ministry of Defence]


The two countries signed a plan for co-operation specifying joint activities this year.

Macedonia and Greece defence ministers Talat Xhaferi and Dimitris Avramopoulos at the signing of the bilateral plan for co-operation in Athens.[Macedonia Ministry of Defence]

Military and security co-operation between Macedonia and Greece is necessary at a time when the two countries face a variety of security threats, officials said.

Meeting in Athens, defence ministers Talat Xhaferi of Macedonia and Dimitris Avramopoulos of Greece signed a bilateral military co-operation agreement for 2014, exemplifying the good relations the two countries strive to have despite existing political differences.

"The plan shows our capacity to overcome all problems that are on the way to our communicating," Xhaferi said.

The agreement has significant security and political dimensions, said Stojan Kuzev, professor at the European University in Skopje.

"With this act, Macedonia and Greece proclaim their readiness to co-operate in the most sensitive area -- defence, which manifests the countries' readiness to support peace, mutual trust for non-aggression and erase ambitions to change borders," Kuzev told SETimes.

Both Macedonia and Greece will benefit from the agreement because they are a bridge for all regional developments, said Vasko Nikolovski, professor on terrorism at the MIT University in...