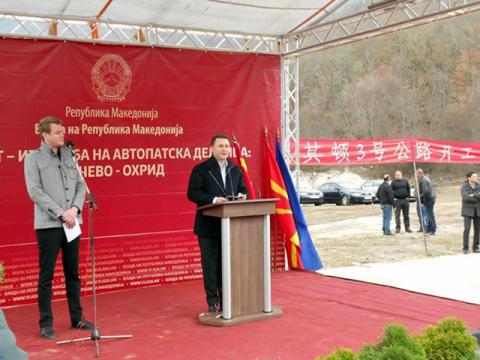 The first stretch will be built in the west of the country, a 57-kilometre highway linking the western resort of Ohrid to the nearby town of Kicevo, which will also improve access from Skopje to Ohrid.

It will eventually form part of the unfinished Corridor 8, linking the country with Bulgaria to the east and Albania to the west.

The other 50-kilometre motorway segment will link the capital, Skopje, to Stip, an important regional economic hub.

The stretch will also provide Stip with access to the existing pan-European Corridor 10, which connects Macedonia with Greece to the south and Serbia to the north.

Announcing the works as the “biggest investment in infrastructure in the last 50 years in Macedonia”, Gruevski said that in a four-year period, upon their completion, the motorway stretches will significantly boost transport and help the local economy.

The loan marks the first serious attempt by the Macedonian government to tap into Chinese funds for transport allocated for the region. Beijing has assigned some 10 billion euro for reconstruction and development in South-East Europe.

It already started building the last 28-kilometre stretch of Corridor 10, a project that will cost some 300 million euro, mostly provided by the European Investment Bank and the European Bank for Reconstruction and Development.

Once these three stretches are completed, the country will have at least 130 newly-constructed...

Bulgarian Doctor: This is Not a Wave, this is a Tsunami, we have Too Many Patients