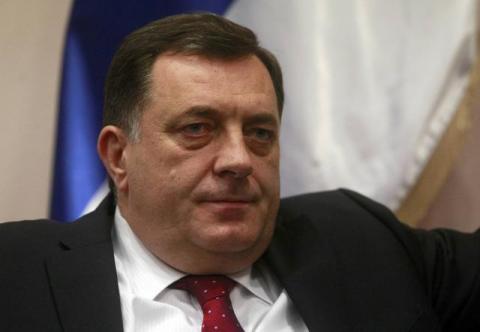 VIŠEGRAD -- Milorad Dodik has called on those in power in the Serb entity, the opposition, NGOs, and citizens to preserve peace and stability until October elections.

The president of the Serb Republic (Republika Srpska, RS) noted on Sunday that "anything other than that would lead the RS into a state of emergency."

"Only legal elections give the legitimacy to the RS, its institutions and people," Dodik added.

"Anything other than that will lead us into a state of emergency that will not allow us to ever again stabilize, until they impose a political framework that would be against us," he told reporters in Andrićgrad near Višegrad, eastern Bosnia-Herzegovina.

Dodik was there along with film director Emir Kusturica and leader of Serbia's DSS party Vojislav Koštunica.

The RS president also said that the Serb entity was "functioning flawlessly, institutions-wise," and that this would remain so in the future, adding that authorities in Bosnia's other entity - the Muslim-Croat Federation (FBiH) - "do not function, which is confirmed by the fact power has been turned over to the street and some sort of plenums there."

Noting that the global economic crisis also caused regional economies to stagnate, Dodik said that "the creators of the global crisis" were now "trying to use political activities, various NGOs and agencies, to spur people in these areas in order to influence political goings-on."

"Despite persistently proving that the violence and demonstrations exclusively concern the Federation, they are globalizing this issue and mentioning it as an issue of the whole of Bosnia-Herzegovina," said Dodik, and added this was "a...