Agreement on UAE loan to be signed on Thursday 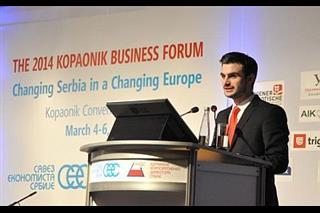 KOPAONIK - Serbian Minister of Finance Lazar Krstic said on Wednesday that an agreement with the United Arab Emirates (UAE) on a USD 1 billion budgetary loan and a loan for irrigation, worth USD 100 million, will be signed on Thursday.

The budgetary loan will have a 10-year repayment deadline, at an annual interest rate of two percent, Krstic told reporters, noting that the loan will have to be ratified by the new Serbian parliament.

The interest on the budgetary loan is low - below what is dictated by current conditions in the global financial market - and amounts to USD 290 million, Krstic said.

A delegation of the Ministry of Finance will travel to the UAE on Thursday to attend the signing of the agreement, Krstic said.

Whether we will use the last real chance to deal away with the past and bring back the future to the country depends only on our courage and determination and activities we carry out in the course of several months after March 16, Krstic said and added that Serbia has never had favourable geopolitical circumstances.

During his presentation at the Kopaonik Business Forum, Krstic listed as goals the deficit reduction to 3 percent of the GDP by 2017, a responsible fiscal policy which would make room for a more relaxed fiscal policy that would serve as the backbone for economic development and reduction of the government's stake in the economy.

As four main conditions for realisation of the goals, Krstic listed a unified government policy which would be conducted in all sectors in coordination regardless of the...