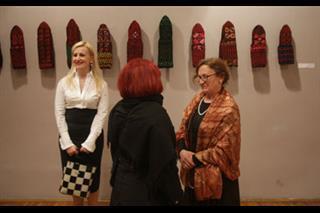 BELGRADE – An exhibition of thematic prints on the love magic practiced by the Warlpiri and Kukatja people of the Central and Western Deserts of Australia was opened at the Museum of Applied Arts (MPU) in Belgrade on Thursday.

Opening the “Yilpinji: Love, Magic and Ceremony” exhibition last night, Australian Ambassador to Serbia Julia Feeney pointed to the rich and unusual tradition of the Aborigines.

The art works on display represent love magic rituals and ceremonies (called 'Yilpinji' in the Warlpiri language), which sometimes involve the painting of special designs onto one's body or the production of 'love objects' to enact these ceremonies, which are always enacted separately by men and women as a means of attracting the object of their sometimes adulterous or otherwise forbidden desire, Feeney said.

The Australian Embassy to Serbia, which organized the event, invited Etno Mreza, an organization that brings together producers of handicrafts from Serbia to present that which is traditional in Serbian art, to be the event's special guest.

Etno Mreza Director Violeta Jovanovic told Tanjug that Serbia's rich love magic tradition is also showcased with items specially selected for this exhibition and the whole idea was to put on display love magic traditions of Australia and Serbia side by side.

MPU Director Ljiljana Miletic-Abramovic said cooperation with Australia has been successful for many years now. In a statement for Tanjug, she stressed that the exhibition is the first dealing with the traditional visual culture of the Aborigines in a systematic way.
The “Yilpinji: Love, Magic and Ceremony” exhibition comprises 18 thematic prints and it will be open to the public for two weeks.