Budget deficit up to eight percent of GDP in 2014 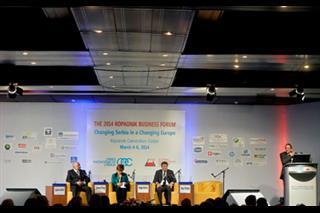 KOPAONIK - Serbia's budget deficit would reach seven, even eight percent of gross domestic product (GDP) this year, which would be the highest rate in the region, while GDP is expected to grow from zero to one percent, Chairman of the Fiscal Council Pavle Petrovic estimated on Tuesday.

Speaking at the 2014 Kopaonik Business Forum, Petrovic said that fiscal consolidation measures have to be taken urgently, as well as fiscal adjustment by 2017, by making spending cuts of up to two percent of GDP annually, so that at the end of the period, the deficit would drop to 2-2.5 percent of GDP.

Pension reforms must be launched in 2014, and that means raising the retirement age and discouraging the early retirement, Petrovic said, adding that the system of salaries in the public sector has to be reformed and pay grades introduced.

When the reforms are implemented, only then a possible reduction in pays and pensions could be considered by the end of this year, and not vice versa as politicians are planning, Petrovic said.

In the period between 2009 and 2013, Serbia's budget deficit rose on average 1.5 percent annually, faster than in other countries in the region, and public debt two times faster, which shows that public spending did not fall, but rather increased, Petrovic noted.

Public companies and banks eroded public finances, as they helped double Serbia's public debt in the last five years, including a rise in the debt of...