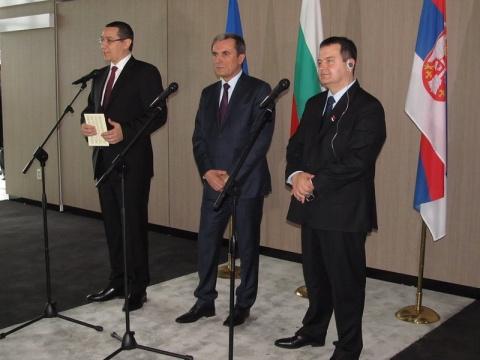 Following a meeting behind closed doors which lasted over an hour, Plamen Oresharski, Victor Ponta and Ivica Dacic gave a joint press conference. Photo by BGNES

The Prime Ministers of Bulgaria and Romania, Plamen Oresharski and Victor Ponta, have agreed to back Serbia's EU bid at a meeting in the Danube city of Ruse.

During Friday's trilateral meeting of the premiers of Bulgaria, Romania and Serbia, Oresharski and Ponta noted that both countries were interested in accelerating the EU accession of Western Balkan countries which would enable the deepening of cooperation through the instruments of the European Commission.

Following a meeting behind closed doors which lasted over an hour, Plamen Oresharski, Victor Ponta and Ivica Dacic gave a joint press conference.

The three Prime Ministers informed that they had discussed opportunities for joint projects under the Danube Strategy in order to fast-track the development of the region.

Oresharski, as cited by the BGNES news agency, pointed out that cooperation in border areas was an important matter for the people living on both sides of the Danube River.

Bulgaria's Prime Minister reminded of his recent meeting with Dacic in Dimitrovgrad, adding that the main topics on the agenda had been unemployment, poverty and encouraging investments in the region.

He informed that the three prime ministers had signed a declaration outlining the aspects of cooperation between the three countries.

Oresharski explained that he had discussed the crisis in Ukraine and its negative impact on the entire region with his Serbian and Romanian counterparts. He noted that the three had expressed hopes that a more comprehensive dialogue between Kiev and Moscow would result in a faster resolution of the crisis, thereby preventing long-term negative consequences.