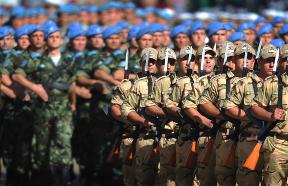 Bulgaria soldiers are working with troops from Serbia on joint exercises and co-operation. [AFP]


Joint training operations and preparation for multi-national exercises are the focal points of military co-operation between Bulgaria and Serbia.

Bulgaria soldiers are working with troops from Serbia on joint exercises and co-operation. [AFP]

Bulgaria and Serbia have been increasing their military co-operation in an effort to boost regional stability and assist Serbia's EU accession, experts said.

Bulgaria Defence Minister Angel Naydenov and his Serbian counterpart Nebojsa Rodic signed a protocol for MiG-29 flight simulator training during a meeting in Sofia in February. Bulgaria has 15 MiG-29 fighters that make up the backbone of its current air defence.

The two ministers also outlined a plan to expand co-operation in military education, medicine, military police and military geography, according to the Bulgarian Defence Ministry.

"There is also development potential for the mutual participation of the two countries in international missions and operations of the UN and the EU. For the better future of the Balkans, a better security environment should be set up, which can be guaranteed by the transparency in relations and complete mutual trust between the Balkan countries," the ministry said in a statement to SETimes.

Major Jovan Krivokapic, a spokesman for Serbia's Defence Ministry, said the main points of co-operation between the two countries are joint training exercises, military police collaboration, plus co-operation in the fields of application software, programming and budgeting, military medicine and public relations.

"Joint exercises and training, which significantly increase the interoperability and operational capabilities of the armed...