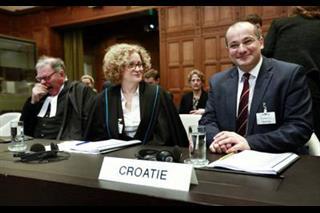 THE HAGUE - Croatian legal representatives argued before the International Court of Justice in The Hague Tuesday that Serbia had planned and had a clear intention to destroy Croat communities across Croatia during the 1991-95 war on the territory of that country.

On the second day of public hearings at the ICJ, Croatia claimed that the former Yugoslav People’s Army (JNA) knew of genocidal intent and activities of paramilitary groups, including the “Tigers” led by Zeljko Raznatovic, nicknamed Arkan.

The paramilitary groups, which have destroyed entire Croatian villages, hamlets and towns, were acting with the knowledge of the JNA, which supplied them with weapons, said a member of the Croatian legal team, Philippe Sands.

The military capacity of the JNA was such that it could control the paramilitaries, and it should have been aware of the danger that the genocide against Croats would happen, said Sands.

The Croatian News Agency (HINA) cited the British law professor as saying that Serbia is guilty because it did not prevent the genocide and punish the perpetrators.

Speaking of the intent element of genocide, Sands said that to qualify an act as this most serious crime it is sufficient to prove it was committed with intent to destroy in part, not necessarily in whole, a national, ethnic or religious community.

The giving of witness statements and examination of witnesses and witness-experts called by Croatia are planned after Croatia’s presentation of oral argument, but their testimonies are, according to a decision by the ICJ, to be disclosed only after the conclusion of the public hearings, on April 1.