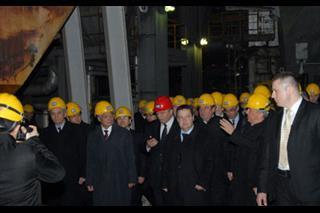 KOSTOLAC - The construction of a new 350 MW unit at the Kostolac thermoelectric power plant is the most significant project in Serbia, second only to the construction of the South Stream gas pipeline, Serbian Prime Minister Ivica Dacic has said.

The new unit, Block B3, should be completed by the end of 2019 and will be worth over USD 1 billion, with the project to be implemented thanks to a favourable Chinese loan with an interest rate of 2.5 percent and a repayment deadline of 20 years, Dacic said on Thursday.

Taking investment loans for capital projects should not be avoided as they have a positive impact on GDP growth and overall development in the country, Dacic said, noting that loans should not be taken to bridge deficit gaps.

Unfortunately, Serbia lacks capital projects, which are very important for getting the country out of the economic crisis, he said.

Dacic and Chinese Ambassador to Serbia Zhang Wanxue inspected works on the boiler room of the Kostolac B1 power plant, carried out by Serbian and Chinese companies.

Dacic later said that he is pleased with the methods and quality level of the work of Chinese companies in projects in Serbia.

Power plant director Dragan Jovanovic said that the loan arrangement with China has been used to overhaul Block B2, with Block B1 to be overhauled by the end of November.

As a result, the plant's capacity has been increased from 245 MW to 350 MW, with a boost in profits of more than EUR 35 million, he added.

Last year, the Kostolac power plant had a record output of over 6,400,000,000 kWh of electricity, boosting profits by RSD 4.3 billion, Jovanovic said.

The Chinese ambassador said that he is delighted with the results...