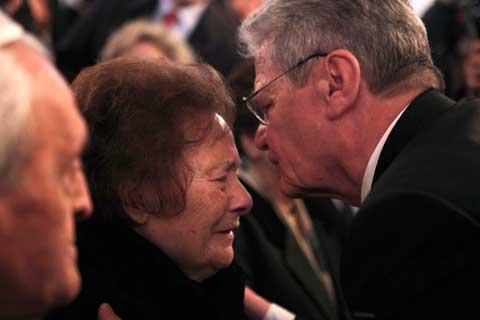 German President Joachim Gauck (right) leans in to embrace 90-year-old Esthir Cohen (left) during a visit to a synagogue in Ioannina on Friday. Cohen is one of just two Jews still alive in the northwestern town today who survived the Holocaust and made it back from Auschwitz.

While visiting a village in northwestern Greece, where Nazis executed 92 of its 96 residents, German President Joachim Gauck Friday became the first official from his country to apologize for his countrymens actions at the site, as well as in other parts of Greece.

Gauck visited the village of Ligiades in Epirus on the last day of his three-day visit to Greece with Greek President Karolos Papoulias, a resistance fighter during the Second World War. Nazi occupying forces shot 92 residents of the village as reprisals for the rebels actions.

I wish to articulate what the perpetrators and those who were politically responsible for so many years in the postwar period did not do or were not able to utter, Gauck said.

What happened here was a brutal injustice, and it is with feelings of shame and pain that I beg forgiveness from the families of those who were murdered, added the German president, who was the first official from his country to apologize for the Nazis actions while visiting one of the sites of their atrocities in Greece.

Gauck also said that he regretted the fact there had been no official apology before. This creates a second form of guilt, he said. He thanked Papoulias for organizing the trip, which he suggested would help reconciliation between the two countries.

During his visit to Greece, however, Gauck rebuffed calls from Papoulias and Foreign Minister Evangelos Venizelos for Germany to examine Greek claims for war...