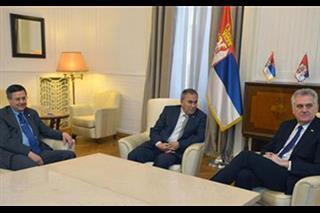 BELGRADE - Serbian President Tomislav Nikolic stated on Friday that Serbia has proved to be a reliable partner and an honest friend, and improved its reputation and position in the world, adding that this approach would not change after the early parliamentary elections on March 16.

"Serbia has devoted a great deal of effort over the past two years to renewing old friendships around the world and establishing good relations with all countries,“ Nikolic said at a meeting with the ambassadors of Algeria and Palestine, Abdelkader Mesdoua and Mohammed K. M. Nabhan, respectively.

President Nikolic and ambassadors Mesdoua and Nabhan agreed that the cooperation between their countries has reached a satisfactory level, noting, however, that room for improvement still exists, released the presidential press service.