Nikolic: Visit to Tunisia paid for more than one reason 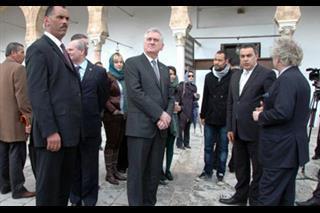 BELGRADE - Serbian President Tomislav Nikolic has said that he visited Tunisia to commemorate World War I events relating to a rescue of Serbian soldiers and to offer support for the government of the country on its path to democracy.

“More than 300,000 Serbs were here in these regions, and we came here to thank the host not only for the care shown from 1915 till 1919, but also for the care they are showing today, as all the places we visited are being well taken care of,” Nikolic said in a statement to Tanjug and Radio Television of Serbia (RTS) reporters on Thursday.

The Serbian president said that the visit to Tunisia was also paid to offer support for the leadership of Tunisia, who managed to cope with huge problems and reach a national consensus on a new constitution and holding of parliamentary elections.

Nikolic said that bilateral economic cooperation comes nowhere near the friendship between the two countries, which has been there for many decades.

During talks, Nikolic said, the Serbian delegation presented their views concerning economic recovery of the two countries and agreed with Tunisian officials about the need to find common grounds for future economic cooperation.

The Serbian president said that he received assurance that Tunisia will not change its stance on the unilaterally declared Kosovo independence.

Nikolic paid a two-day official visit to Tunisia on Wednesday and Thursday.