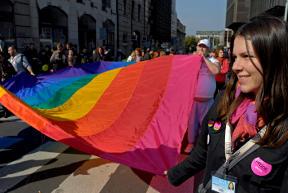 LGBT activists are a main target for extremist groups in Serbia. [Nikola Barbutov/SETimes]

Activists and the EU are urging Serbia to increase protection for human rights defenders.

LGBT activists are a main target for extremist groups in Serbia. [Nikola Barbutov/SETimes]

Although Belgrade has made progress in its efforts to stop radical groups' actions against vulnerable members of society, including human rights defenders and minorities, more action is needed to achieve security and to meet EU standards, experts said.

"While we welcome the progress made, threats and violence remain a significant factor. Extreme right-wing organisations published a 'black list' of media organisations, NGOs and prominent human rights defenders, and incited violence against them. Authorities have not taken the appropriate [responsive] actions," the EU Delegation in Serbia said in a written statement for SETimes.

One of the most notable recent incidents involved threats against Aida Corovic, former head of the organisation Urban-In from Novi Pazar, a predominantly Muslim region in Serbia. Islamic extremists were threatening her because of her critical viewpoints on radical interpretations of Islam.

Police gave her around-the-clock protection when the threats escalated earlier this year.

"Systematic change is needed. The educational system, media system, the whole system should be improved if we want to be protected from extremism," Corovic told SETimes.

Milan Antonijevic, director of the Belgrade-based Lawyers Committee for Human Rights, said an increase in the government's efforts will benefit the country as a whole.

"The solution for human rights defenders' protection and the fight against extremist groups should be systematic, a...