Serbs to stage rally in Strpce over arrest of fellow nations 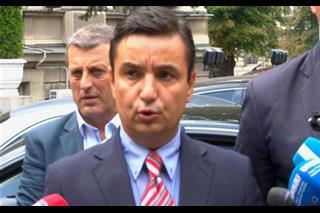 STRPCE - Several hundred Serbs rallied in Strpce on Wednesday urging the release of five fellow nations who were incarcerated in an action by the ROSU special unit of the Kosovo police.

After the last police action, the situation in Strpce is peaceful on Wednesday, Ivan Redzic, official of the municipality of Strpce, told Tanjug, adding that citizens are frightened by everything that happened.

In Tuesday's action by the Kosovo police in Strpce, members of the local police Dejan Stevanovic, Radisa Jovanovic, Dragan Markovic, Dejan Jorgovic and forest farmer Dragutin Ivanovic were arrested and placed in a 48-hour detention.

Vladeta Kostic, president of the Citizens' Initiative Srpska, told Tanjug in Strpce on Wednesday that the locals look really frightened and the families of the detained people are experiencing great stress.

He called on Serbs in Kosovo-Metohija not to respond to provocations, and urged the international community to do all for the Serb community in the province to feel safe.

Kostic said that the members of the Citizens' Initiative Srpska in the local municipal assembly, which holds an extraordinary session on Wednesday, are calling for a condemnation of the excessive use of force in Tuesday's action by the ROSU special unit of the Kosovo police in Strpce, stressing that the detained Serbs should be released pending trial.

“What we, and particularly the members of their families, find to be the most distressing is the fact that there is still no information about the detainees. We do not know where they are or why they are accused,” he said.

Kostic called on representatives of the international community to prevent such events and put a stop to detaining Serbs...