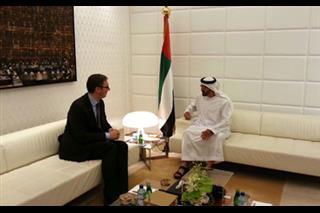 The talks covered all joint projects in the United Arab Emirates (UAE), project 'City on Water' and loans which Serbia will get from UAE on lowest interest rates.

The two high officials also agreed that Finance Minister Lazar Krstic should visit Abu Dhabi in the next two days so as to finalise and carry out the reached agreements, Vucic's cabinet released.

Vucic and bin Zayed concluded that the preservation of political stability in Serbia is a condition for economic progress and better future of Serbia and its citizens, states the release.

Photo Tanjug/Office of the First Deputy Prime Minister of Serbia