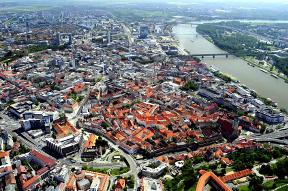 Zajecar, Serbia, was chosen as one of Europe's top 10 cities of the future. [AFP]


The cities were chosen based on categories including human resources and life and business environment. Also in business news: Cyprus appoints Georghadji as new central bank governor.

Zajecar, Serbia, was chosen as one of Europe's top 10 cities of the future. [AFP]

Five Serbian cities have been included in the list of Europe's top 10 cities and regions of the future compiled by the fDi Intelligence magazine. The awards, based on economic potential, human resources, cost effectiveness, quality of life, infrastructure and business environment, were given to Zajecar, Zrenjanin, Sremska Mitrovica, Ruma and Vranje.

Albania signed a double taxation avoidance agreement with the United Arab Emirates at a meeting in Tirana. The top diplomats of the two countries also reached a series of financial, economic and education co-operation deals aimed at improving bilateral ties.

Bosnia and Herzegovina's (BiH) two entities, the Federation of Bosnia and Herzegovina and Republika Srpska, will be able to share some of the profits built up by the national power grid, Elektroprenos BiH. Under the new law passed by the national parliament, the two entities will be able to share about 30 percent of the 167 million euros accumulated from transmission fees since Elektroprenos BiH was formed in 2006.

Cyprus appointed Chrystalla Georghadji, the country's auditor general, as its new central bank governor after the resignation of Panicos Demetriades. Georghadji is the first woman to take the post. She will assume office April 11th.

Serbia makes about 100,000 euros monthly from leasing properties that were seized after they were found to...