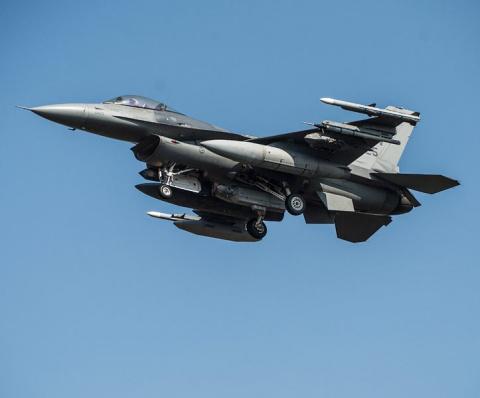 A US F-16 fighter jet in the Polish air space prepares to land at the Air Base in Lask, central Poland, 14 March 2014. Photo: EPA/BGNES

The US is preparing military exercises in Poland, said US ambassador to Poland, Stephen Mull.

According to Mull, they would included  Poland, the Czech Republic, Hungary, Slovakia, Romania, Bulgaria and the Baltics.

Polish radio station Radio Zet, quoted by Reuters, said Mull told them that the exercise will take place in the Lask base in central Poland.

Meanwhile, a defense ministry official said France is offering to send warplanes to help provide air patrols over the Baltic states and Poland.

The ministry official said France was "available — if NATO requests it — to contribute to air policing patrols" in the former Soviet republics and Poland, now members of the Atlantic alliance. The comments came as French Defense Minister Jean-Yves Le Drian visiting Estonia, Lithuania and Poland on Friday.

The United States and Britain have already provided such support.

A French contribution could include warplanes, AWACs surveillance aircraft and radar. The official spoke on condition of anonymity because he was not authorized to speak publicly on the matter.

Le Drian also said that France will terminate its military cooperation with Russia, including military exercises. France might also reconsider the contracts for military equipment. - In 2011 France and Russia signed an agreement for the sale of two warships for over EUR 3 B. Le Drian said the matter will not be considered until October.

Earlier on Friday Germany said it terminates all contracts for providing military equipment and weapons to Russia.