Reds and Greens stroll in league before trips to Spain 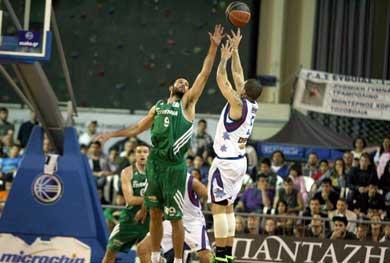 Panathinaikos and Olympiakos hardly broke a sweat during their Sunday games for the Greek league against relegation-threatened opposition, but third-placed Panionios suffered another loss and is now threatened by PAOK.

A few days before their crucial matches for the Euroleague in Spain, Panathinaikos beat Ikaros 85-64 at Halkida and Olympiakos thrashed Panelefsiniakos 94-64. They both struggled in the first half of their matches, but then put an end to their struggling opponents aspirations for an upset.

The upset did come on Rhodes though, where local Kolossos took a colossal step toward safety with its 75-64 win over Panionios on Saturday. The result means that the Nea Smyrni club is now just one point ahead of PAOK, that defeated the seasons surprise package, Nea Kifissia 92-83.

In other weekend games AGO Rethymnou saw off KAO Dramas 77-72, Aris beat bottom club Ilisiakos 63-51 in a game far tighter that the score reveals, and Trikala stunned Apollon at Patras with a 74-67 win.