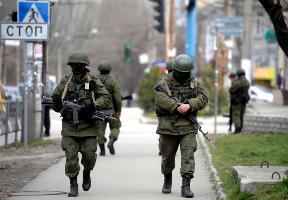 A group of Serbs said they are supporting the Russian forces in Crimea. [AFP]


A group of extremists who have joined the Russian paramilitary forces in Crimea do not represent the state, experts tell SETimes.

A group of Serbs said they are supporting the Russian forces in Crimea. [AFP]

A small group of Serbian citizens who are in Crimea to support Russian paramilitary forces are damaging the Balkan state's international reputation, experts and citizens said.

Just days after Russian troops moved into the Crimea peninsula, members of the extremist Chetnik Movement from Krusevac, central Serbia, arrived in Simferopol.

"We went there because we were invited by our brothers, the Russian Cossacks, to help them in their fight for Crimea. New members are ready and can join our members there whenever it is needed," Njegos Popovic, a Chetnik Movement representative, told SETimes.

"Our aim is to support the Russian people in the name of the Serbian people," said Milutin Malisic, a Serbian volunteer. "We are representing the Chetnik movement, which is similar to the Russian Cossacks," he told Russian agency Itar Tass.

Malisic, who said his group is called "the Wolves," said the initiative is to repay the Russians for their support for Serbia in the Balkan wars of the 1990s.

Milan Jovanovic, director of the Belgrade-based Forum for Security and Democracy, said the main reason the group went to Crimea is to attempt to create obstacles on Serbia's path to the EU.

"These people that are promoting themselves as Chetniks in Crimea are harmful. They are harming the image of Serbia and threating its EU integration. They are damaging relations with NATO as well, which is a guarantor of stability for the whole of Europe,"...