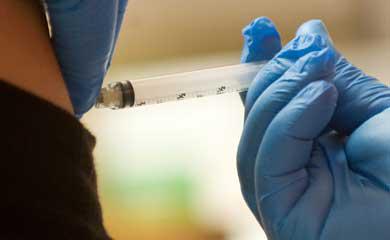 Greece has experienced more deaths from flu than any other European country this year apart from Spain, whose population is more than four times larger, according to the latest figures measuring the viruss impact.

Data collected by the European Center for Disease Prevention (ECDC), made public in Greece by the Athens Medical Association (ISA), showed that 155 people had died in Spain by Saturday after contracting flu, while the number of lives lost in Greece to the virus reached 106. Spain, however, has a population of some 46 million, whereas under 11 million live in Greece.

The Center for Disease Control and Prevention (KEELPNO) said on Monday that flu deaths in Greece had risen to 110 and that another 46 people were receiving hospital treatment. A total of 286 people have received treatment in intensive-care units since the flu season began. However, the number of people contracting the virus has been falling since March 3.

The virulent H1N1 strain and a poor vaccination rate have been blamed for the increase in the number of deaths from the virus compared to last year.

ISAs president Giorgos Patoulis called for Greece to develop a national vaccination plan for the next flu season. SYRIZA said that the governments spending cuts to primary healthcare had contributed to the viruss more damaging impact this year.

Improved Pfizer Vaccine, which will Affect Omicron, will be Ready No Earlier than March
Thousands in Sweden protest against Covid vax certificates