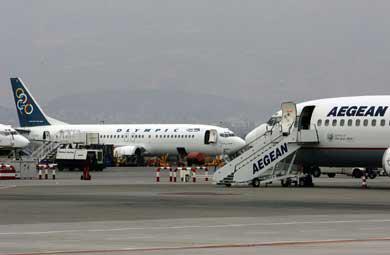 Greeces largest carrier by passengers, Aegean Airlines is strengthening its presence in the domestic and international markets this year while aiming at the creation of an extra 2,400 jobs by the start of the summer season.

Aegean announced on Thursday it has expanded its capacity for the whole of this year by 1.15 million seats to a total of 13 million seats, while maintaining eight hubs in Greece with the addition of its new one at Hania.

During the announcement of its summer schedule, Aegean confirmed the operation of 205 international and 51 domestic routes, with 6.6 million available seats for 33 Greek destinations and another 6.4 million for 81 overseas destinations.

As a part of its expansion program, the airline has boosted its fleet with another five Airbus aircraft, taking the total count to 50 planes, including those of its subsidiary, Olympic Air.

The companys outward-looking policy during the crisis in Greece  i.e. from 2008 to 2013  has seen it almost double its international passenger traffic from 2.2 million in 2008 to 4 million last year.

The airlines plans are actively strengthening Greek tourism given that it is increasing its seat capacity to and from Germany by 20 percent compared to last year to reach 1.3 million for 2014, adding 12 new routes and flying to nine destinations in Germany from six Greek hubs.

Turkey in dialogue with all sides in Afghanistan, including Taliban: FM