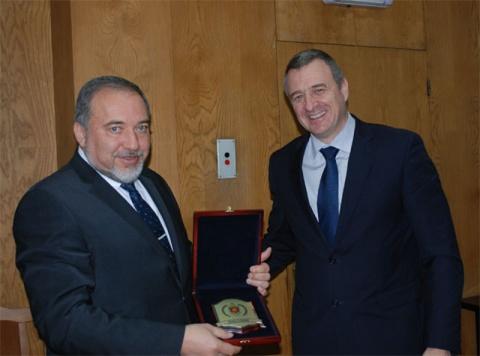 Yovchev and Liberman discussed different aspects of bilateral cooperation at a working meeting at the Ministry of Interior headquarters in Sofia on Thursday. Photo by BGNES

Liberman is on a visit to Bulgaria at the invitation of Yovchev from November 2013, according to the press office of Bulgaria's Interior Ministry.

Yovchev and Liberman discussed different aspects of bilateral cooperation at a working meeting at the Ministry of Interior headquarters in Sofia on Thursday.

The two ministers agreed on the strategic character of bilateral relations, including in the sphere of security and home affairs and took note of the upward trend in the development of active political dialogue between the two countries.

Yovchev and Liberman voiced expectations that the further development of the existing excellent political relations would be given a boost by the third joint sitting of the governments of Bulgaria and Israel to be held in 2014.

The two defined security as an exceptionally important aspect of bilateral cooperation between Bulgaria and Israel.

The two ministers agreed on the need for efficient international cooperation in counteracting terrorism and other threats to global and regional security.

Yovchev thanked Israel for the proactive cooperation in the investigation of the 2008 terror attack at the Sarafovo airport in Burgas.

"I am optimistic that we will track down the perpetrators of the terror attack," he declared.

During the meeting, the two ministers expressed readiness to work for the establishment of a regional response group to crises and emergency situations.

The two ministers also exchanged views on the situation in Syria and...