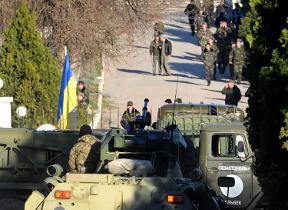 The West supports the territorial integrity of Ukraine and calls for united actions against Russian interference.

EU officials and analysts are denouncing a plan put forth by Russia to create a federalised system in Ukraine, calling it an attempt to split the country.

Soon after Russia annexed Crimea last week, following the results of a disputed referendum, Vladimir Zhirinovsky, the deputy speaker of the Russian Duma, proposed dividing Ukraine along the lines of an infamous Nazi-Soviet pact.

Zhirinovsky, who usually voices the Kremlin's ideas and plans, sent official letters to Poland, Hungary and Romania, proposing that those countries take back regions of Ukraine, Reuters reported.

The letter suggests Ukrainian regions Volyn, Lviv, Ivano-Frankivsk, Ternopil and Rivne would join Poland, while Hungary and Romania invite Transcarpathia and Chernivtsi to join them.

"It's never too late to correct historical errors," Zhirinovsky wrote, according to Reuters.

Poland's Foreign Ministry confirmed the letter was received, saying that no one considered this letter seriously.

The regions were part of a secret protocol of the 1939 Molotov-Ribbentrop non-aggression pact between the Soviet Union and Nazi Germany that divided several European countries into Soviet and Nazi "spheres of influence," and led to the invasions of Poland, Finland and several Baltic countries.

Ukraine was made part of the Soviet Union at the end of World War II.