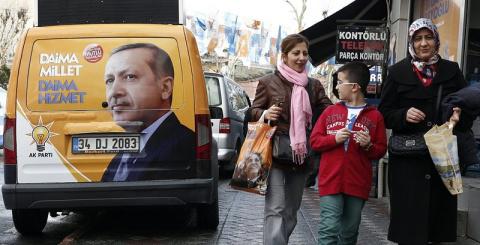 With only two days ahead of the local elections, the impact of the last leakage on Recep Tayyip Erdogan's government is yet to be seen. Photo by EPA/BGNES

Turkey acknowledged the authenticity of a leaked recording of a top officials' meeting over a possible military operation in Syria.

Turkey's Foreign Ministry representatives nevertheless insisted Friday that the content of the recording was "faked", Frankfurter Allgemeine Zeitung has reported.

The leaked conversation pushed authorities to block YouTube, where the file had been posted.

In an audio file combined with photograph of the officials involved in the recording, intelligence chief Hakan Fidan is heard discussing possible military operations in Syria with Foreign Minister Davutoglu, Deputy Chief of military staff Yasar Guler and other officials.

The operation which they were planning aimed at securing the tomb of Suleyman Shah, grandfather of the founder of the Ottoman Empire, which is located to the north of Syria.

Heated discussions that can be heard in the recording even reach a point where intelligence chief Fidan expresses readiness to create "a justification" to enter Syrian territory.

What Fidan precisely gives as an example is, "I send for men to the other side. I get them to fire eight missiles into empty land. That's not a problem. Justification can be created."

The leak was described as "villainous" by Prime Minister Recep Tayyip Erdogan, who was outraged that a national security meeting could have been illegally recorded.

Ahmet Davutoglu, whose voice could be heard in the recording, even described its posting as a result of "a cyber attack against the Turkish people" and "a declaration of war", apparently referring to the alleged struggle of power of Erdogan and the ruling elite with Islamic cleric Fethullah Gulen, who lives in the United States, but is...