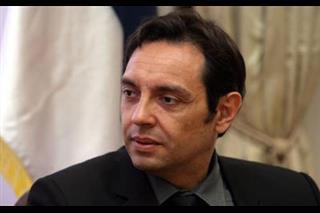 BELGRADE - Serbia's Minister without portfolio for Kosovo-Metohija Aleksandar Vulin has discussed with UN representatives in Belgrade the progress made in research on locations in Serbia where higher levels of depleted uranium have been detected.

Vulin on Thursday met with Peter Due, the Representative of the UN Secretary-General and Head of the UN Office in Belgrade, and UN Resident Coordinator Irena Vojackova-Solorano, the Serbian government's Office for Kosovo-Metohija said in a statement.

Following field research in 1999 and 2002, the UN Environment Programme (UNEP) published reports on locations with higher levels of depleted uranium, the statement said.

On the 15th anniversary of the bombing of the Federal Republic of Yugoslavia, Vulin discussed with the UN representatives the progress made in research on locations with higher depleted uranium levels in the territory of central Serbia, but also in Kosovo-Metohija.

Such research is helpful not only to Serbia, but also to other countries, Minister Vulin said.

Vojackova-Solorano said that the reports were the first of their kind and that the time has come to monitor the situation again, especially if the Serbian government has evidence of an impact of the bombing campaign on the health of the population in Serbia, the statement said.

She said that the UN agency will strive to provide support to Serbia's health care system in the coming years.

Due also inquired about the...