As vote on multi-bill looms, gov't looks to aid 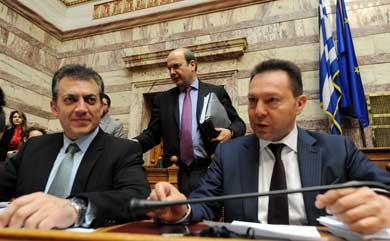 The government is bracing for a crucial week, with eurozone finance ministers expected to discuss the release of further rescue loans to Greece at an informal summit in Athens starting on Tuesday.

But it must first suvive a vote on a multi-bill of reforms demanded by the troika in return for continued rescue funding, due to be held at midnight on Sunday following two days of debate.

On Saturday, government officials were busy seeking to overcome objections by coalition MPs to the bill as critics slated the legislation.

Despite the government's efforts, there was one casualty. Alternate Agriculture Minister Maximos Harakopoulos announced his resignation on Saturday in protest at a controversial provision in the bill extending the shelf life of milk. Harakopoulos, who represents the agricultural constituency of Larissa, said the reform would hurt the domestic dairy sector. He pledged not to vote against the provision however so as not to jeopardize the foreign rescue funding on which Greece relies.

Meanwhile, Finance Minister Yannis Stournaras indicated that, although eurozone finance officials will discuss the question of aid to Greece at the Athens Eurogroup, a final decision on the release of up to 12 billion euros in aid is to be taken at a scheduled summit of European Union leaders on April 15, with the disbursement expected two days later. This would provide Greece with adequate funding to pay down some 10 billion euros in bonds due to expire in May.

According to sources, Athens is hoping to bolster state coffers by tapping capital markets for up to 2 billion euros before Easter, which falls on April 20. Buoyed by indications that Greece is on track to post a primary surplus, government officials have indicated that a...

Daily Mail: Pressure on Johnson for free travel from July 19 to Greece and other countries

Exports: Is Greece galloping or not?