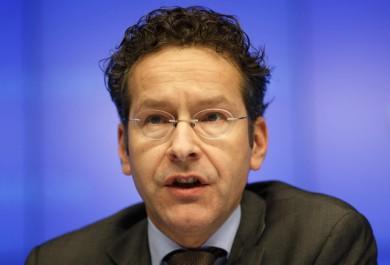 Greece needs another infusion of money to avoid default in May, when it has to repay 12.5 billion euros ($17.2 billion) of government debt. The Mediterranean nation has faced repeated delays in accessing a 130 billion-euro bailout package, its second, and hasnt received a payment since December.

The speed of disbursements will be adjusted to the needs, but we will decide Tuesday, Dijsselbloem, who heads meetings of euro-area finance ministers, said in an interview late yesterday en route to Larnaca, Cyprus. He said a bit more than 8 billion is now foreseen for the next aid tranche.

Dijsselbloem said euro-area ministers will focus on current developments and postpone talk of debt relief or a third rescue package for Greece. Ministers also will examine conditions in Cyprus, where the economy has been hit hard by the conditions that forced it to seek aid last year.

Greece and Cyprus have been pummeled by the euro areas sovereign debt crisis, which forced five of the euro areas 18 nations to seek rescues. Ireland and Spain already have exited their aid programs, and Portugal is seeking to regain full access to financial markets as its bailout approaches its end in May.

Issuing debt may also be possible for Greece depending on market conditions, Dijsselbloem said.

Greece is now working on returning to the capital market; they want to do that this year, Dijsselbloem said. This will of course be careful, with limited amounts, but it is important to wait for that and see how it goes.