Additional bailout funding on the way to Greece 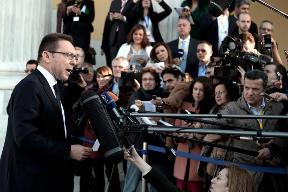 Greek Finance Minister Yiannis Stournaras speaks to reporters on Tuesday (April 1st) as he arrives for a meeting of European and eurozone finance ministers in Athens. [AFP]

Additional bailout funding on the way to Greece


Reforms allow Athens to tap into bailout money set aside by international lenders. In other business news: Improved economic conditions allow Cyprus to drop its ceiling on daily cash withdrawals.

Greek Finance Minister Yiannis Stournaras speaks to reporters on Tuesday (April 1st) as he arrives for a meeting of European and eurozone finance ministers in Athens. [AFP]

Greece's parliament approved a series of structural reforms that will allow the disbursement of another 8.3 billion euros from the country's 172 billion euro bailout package. Measures include cutting costs on state healthcare and liberalisation of tightly controlled products and services.

An excise tax on gasoline and cigarettes took effect April 1st in Romania. The measures are intended to bring additional revenues to the state budget.

Albania and Kosovo signed an agreement to build a new 110-kilowatt power line between Kukes and Prizren. The initiative is part of the two countries' effort to establish a common energy market.

Cyprus dropped the 300 euro daily ceiling on cash withdrawals that was introduced a year ago as part of the country's bailout efforts. The move was possible due to the overall stabilisation and restoration of confidence in the banking system, officials said.

Serbian air carrier Air Serbia introduced regular flights from Belgrade to Sofia and Bucharest. The new flights became effective on March 30th. The lowest round trip fare is about 90 euros.

The IMF said Montenegro's economy will probably grow by 2.7 percent in 2014, a slowing from its 3.5 percent growth last year. In a statement after a two-day visit...