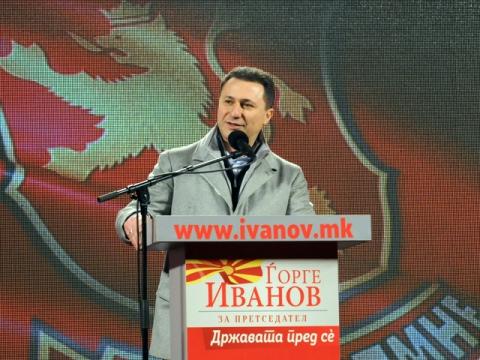 As election races hot up in Macedonia, the ruling VMRO DPMNE party has accused the opposition of holding standpoints on the sensitive issue of the country's name issue that betray national interests.

The opposition has meanwhile accused the ruling parties of taking too hard a line on the name issue, and of excluding them from any discussion about it.

The Prime Minister and VMRO DPMNE head, Nikola Gruevski, has gone so far as to say that the opposition Social Democrats, SDSM, sound like Greek politicians on the name issue - Greece being Macedonia's foe on the name issue.

Speaking at a party rally in support of VMRO DPMNE's candidate in the presidential race, the incumbent head of state, Gjorge Ivanov, Gruevski said:  “I see how easily the SDSM throws different names [for Macedonia] on the table, how easily they speak against us, and hold us to blame for the name dispute not being solved and for Macedonia not entering the EU and NATO, although we fulfill all the requirements.

“Do I hear [Greek Deputy Prime Minister Evangelos] Venizelos speaking, or the opposition?" he asked.

"It looks like Venizelos is speaking, not a Macedonian presidential candidate. Only the Greeks say such things. I do not believe this is coincidental,” Gruevski added.

Stevo Pendarovski, presidential candidate of the opposition, replied that Gruevski was the only political figure in any position to negotiate with Greece, and so potentially "sell" the country's name, making it absurd to accuse the opposition of treason.

“A name solution should not be a matter of government, family, ethnic or personal consensus,” Pendarovski said.

“We should start solving the name issue by first building a national consensus on it,” he...