Macedonia To Vote Under Shadow of Giant Cross 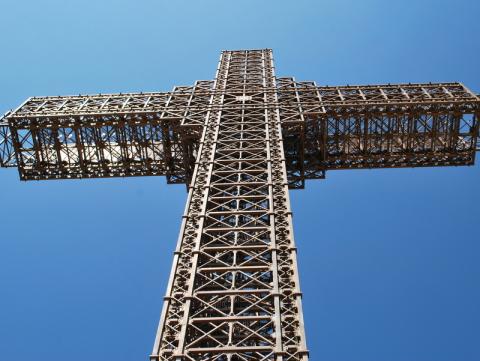 The steel cross, which the authors say will be over 50 metres high, is being speedily assembled in the Skopje municipality of Aerodrom so that it can be opened by Orthodox Easter, celebrated on April 20.

While the initiator of the project, the World Macedonian Congress, SMK, insists that the event will be purely cultural, the opening almost coincides with the second round of presidential elections and the early general elections on April 27.

“This year, the people of Macedonia will mark Christ's resurrection with the third tallest cross in the world,” the head of the SMK, Todor Petrov, said.

He said the gold-coloured cross would weigh 80 tons, be 56 metres high and have a span of 34 metres.

During the groundbreaking ceremony last November, it was said that the cross would be far smaller, 33 metres in height, to symbolize Jesus's age when he died. The cross is being built by donations, the SMK said.

The Congress is seen as close to Macedonia's main ruling party, the VMRO DPMNE party. The municipal council in Aerodrom allowed the construction with votes from VMRO DPMNE councilors.

Macedonia already has a 66-metre-high cross, placed on top of Mt Vodno near Skopje. Called the "Millennium Cross", it was erected in 2001 with the help of the government, which at the time was also controlled by VMRO DPMNE.

Like the larger cross on Mt Vodno, the new cross has the potential to stoke ethnic and religious tension in Macedonia, which has a large Muslim Albanian community.

Some secular Macedonians are also likely to resent the cross as yet another needless addition to the landscape.

The decision to approve the cross came amid speculation on social networks that a nearby Turkish investment project...