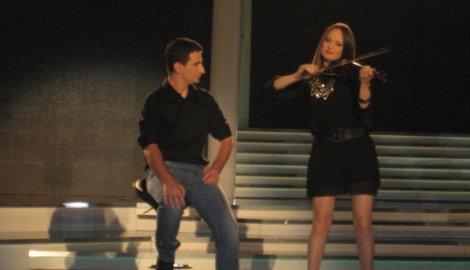 
Tens of thousands of people of the countries in the region have seen on the Internet the footages of young violine player Jelena Urosevic (23) of Ljig.

She is the only artist who composes and plays on violine a mix of Serbian traditional melodies and electronic, country, jazz and classical music!

Although she has graduated from the Faculty of School Methodology, the young artist from Ljig has decided to stick by the violine that he has been playing since a very young age.


The most listened violine

- I have a CD with compositions of various janres played on a violine. I perform in Serbia and abroad and I can say that my melodies are the most listened in the world what is confirmed by the largest number of visits in the class pf violine house music on the Internet, Jelena says.

Her new composition 'Love Is War' presently being aired on many radio stations in Serbia, Bosnia/Herzegovina, Montenegro, Croatia, Macedonia and Turkey is a mix of house, hip-hop and pop music played on a violine. Jelena is performing it with Nemanja Dragicevic of Ub. He is rapping her verses in this song.


- The text is about thoughts of a man wishing to conquer a woman, about messages he is sending to her while she seemingly is playing with him. Violine parts represent a woman response to messages being sent to her by a man while there is a flirt going on between them. The flirt by its atmosphere, energy and power reminds of a love war – Jelena explains.

Jelena and Nemanja have also made a video clip for the ‘Love Is War’ which is expected to be aired by TV...