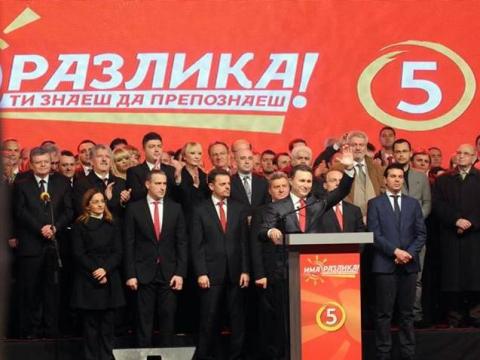 PM Nikola Gruevski at the party rally in Skopje | Photo by: VMRO DPMNE

At their respective general election starting rallies at the weekend, government and opposition parties exchanged accusations on a scale not seen in the gentler presidential race that started two weeks earlier.

“They will repay everything that they took away from Macedonia [to their alleged off-shore companies] in Panama, Switzerland, Czech Republic and elsewhere. They will repay the people for everything they stole,” the SDSM head, Zoran Zaev, told a rally on Sunday in Skopje.

The opposition said that ordinary people were suffering from social injustice and from a decline in democracy while the government was doing nothing to expedite EU and NATO membership.

Under the slogan “Changes for a Fresh Start”, the opposition leader pledged that his party would work on social and economic policies that would boost the middle class and called for people to mobilize against Gruevski who has held power since 2006.

“To those who are disappointed by economic agony and are not interested in politics, who may have never voted before and who are not sure whether Macedonia can live better, we say, 'Yes, it can!'” Zaev told the rally.

Gruevski said the SDSM leaders were cowards for excluding themselves from the party lists of candidates for parliament.