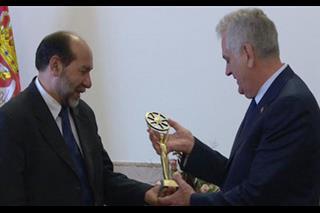 BELGRADE - Serbian President Tomislav Nikolic opened an exhibition titled “The Forgotten Holocaust” at the Roma Art Gallery in Belgrade Monday and said that we must not forget the ties between the Serbian and Roma people.

Next year will see the end of the Decade of Roma Inclusion, Nikolic said, adding that one can find a lot of rights and a lot of protection on paper, but he is not sure that the living conditions have improved for the Roma population.

Nikolic said that he has observed alienation between Roma and the rest of Serbia’s population over the years.
“I must admit today that we have not made much progress in this field and that we have even lost something in that regard,” he said.

Nikolic said that he visited the Mauthausen memorial in Austria a fortnight or so ago and that he saw the same gate that can be seen in an image at the Belgrade exhibition, recalling the Roma, Jews, Serbs and Russian suffering in World War II concentration camps.

He said that the Romani language should get standardized so that Roma could finally have their language accepted and recognized and that books can be printed it the language.
“Let your children learn Serbian, since they need it in the community they live in, but they should also learn to read and write Romani, as it will open up a world of riches to them,” Nikolic said.

World Roma Parliament President Dragoljub Ackovic said that the exhibition is an attempt to use the image and the written word to show what Roma had to go through during the “second world cataclysm.”

The exhibition was organized under the auspices of President Nikolic as an event to observe seventy years since the end of World War II in Serbia.