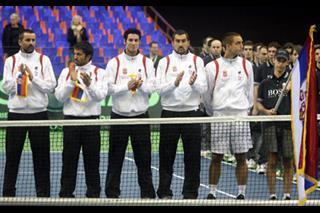 LONDON - The Serbian tennis team will take on India in a play-off tie, trying to keep its spot in the Davis Cup World Group, the London draw decided on Tuesday.

The matches will take place from September 12-14, and India will play a host.

Serbia triumphed in the Davis Cup in 2010, and last year it played in the final.