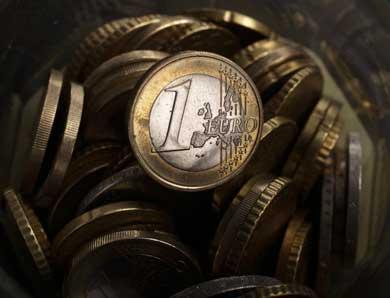 Greece's imminent return to bond markets just two years after a massive debt restructuring, expected as early as Wednesday, lifted investor appetite for riskier credits which has stalled over the last couple of days.

Yields on peripheral eurozone sovereign bonds dipped but remain slightly higher on the week after European Central Bank policymakers warned that any move to print money to raise ultra-low inflation was still a long-way off.

"The fact that Greece is returning is good news for the periphery in general,» one trader said.

While Athens tried to play down the immediacy of the deal earlier this week, fervent demand from foreign investors for its treasury billion Tuesday and media reports that the deal could come as early as Wednesday, has bolstered speculation the deal is imminent.

Greece's ability to issue has been propelled by investors' hunt for high returns in an environment of low official rates. Its 10-year yields have fallen from over 30 percent after it restructured 130 billion euros in debt in 2012, to just above 6 percent - a level not seen since it accepted the first tranche of a 240 billion euro bailout in 2010.

"One year ago it was unthinkable Greece could come to the market and issue bonds. Now it is a reality,» said Alessandro Giansanti, senior rates strategist at ING.

Bankers close to the Greek deal said on Tuesday that the path had been cleared for Athens after the European Financial Stability Facility - which counts eurozone member states as its stakeholders - issued 5 billion euros of seven-year bond.

Socrates vs. Confucius: Epic rap battle (hilarious must watch video!)
When Troy fell Mycenaeans in Greece found out in a day! This is how (drone video)

The thinking person’s concerns and fears